Has Brexit Made Us Happier? 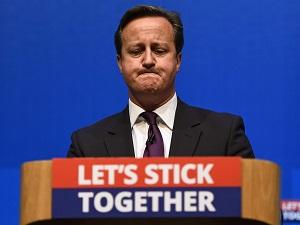 During the Brexit campaign I was struck by Nigel Farage saying that losing a bit of GDP would be worth it if we were all a little happier. Aha, I thought, at last, a politician talking about happiness, maybe that's what this whole thing is about. Maybe this could be a new direction for UKIP now they have won their major argument. They could re-model themselves as a peoples happiness party.

And then all hell broke loose, resignations, recriminations, petitions, legal challenges. While Farage might believe that leaving the EU will make us happier, it's hard to argue that the process of holding the referendum has made us happier. It's looking more like the binary yes/no decision is the real culprit for all the division. Demanding that people pick a side sets us all up for a fight. We might agree on a lot of things, but if you are an inner and I'm an outer then we have no real option but to fight.

There was a brief moment after the result, when Boris was looking absolutely devastated, that we all realized that he had never really wanted to win. At that moment of complete and calamitous defeat, he had an amazing opportunity to turn things around and put everything right. If he had publicly declared that he had never wanted to win, that his plan was only to become leader of the Conservative party after a narrow defeat and that he was responsible for the dreadful mess which now ensued - he could have turned the situation around. If he had come clean about his motives, his tactics and his total failure, he could have volunteered to put an end to the politicking and backstabbing, sort out the dreadful mess he had created, reframed himself as a hero and created a new type of honest politics.

Sadly, he didn't spot this opportunity and instead has opted for humiliation, and probably, obscurity. Maybe we will all forget and he will get another chance, maybe not. One upside of all the chaos is that the the threat of a Boris/Trump world looks a little less likely. The two are very similar characters, or rather they seem very similar and the thing which unites them is that they both suffer from the same psychological flaw, narcissistic personality disorder.

Narcissistic Personality Disorder (NPD) can be described like this "People with NPD usually come across as conceited egotistical and arrogant.. they usually show very little compassion of the thoughts or feelings of others". A narcissists favorite topic is himself and he thinks everybody else agrees with him. A constant drive for self promotion and adoration belies an inner lack of confidence and feelings of self loathing.

While many people in politics are narcissistic, these two are off the scale. Although, there can be a slight problem with diagnosis for the very highly privileged in society. One of the criteria for NPD is to have grandiose sense of self importance, if you are born into huge wealth and privilege you might not think it's grandiose, just a statement of fact. Is it narcissism or are they just the cream of he crop? Another criteria is someone who feels "special or privileged and that he can only be understood by other special or high status people". Again, Boris could just put this down to going to Eton and studying the classics, but then not everybody who goes to Eton exhibits such classic symptoms of NPD.

Keep the Nutters Out

Which leads to another thought, should we allow people who are mentally unstable to run the country? It seems, on the face of it, to be a very glib question, of course we don't want nutters in control! But how, in practice, would we implement this? Psychological testing of Prime Ministers? Before or after they are elected? Who could have the authority to ban an individual from office? Wouldn't that give too much power to the psychologist?

Normally the democratic process would keep the nutters out, but as we see with Boris and Trump, that doesn't seem to be working, if anything, democracy is encouraging more extreme types, which pushes us towards... well, nutters. Politics is also getting moe intrusive into the lives of politicians and appealing less to the well adjusted. Take the Labour leadership issue, Corbyn never really wanted the job but now feels duty bound continue, the MPs want him out, but cannot find a viable alternative, unless you count Angela Eagle.

Power attracts people who want power, and a lot of the people who want power want it so that they can abuse it. Look at Jimmy Saville and the recent spate of child abusers, seeking out positions of power just so that they can abuse them. I'm not saying that all people in power are child abusers, but I am saying that their motives are not necessarily pure.

Maybe Brexit will act as a big fright which wakes us all up a bit and makes us take stock and think about the things which are really important to us, the things which make us happy, simple things that don't take heed of national borders, friendship, security, belonging and, if we are lucky some sort of sense of meaning.